Home < The mind of the matter: social interactions contribute to intelligence in birds

By Alexis Lanza, Department of Biology, University of Florida

“Chirp!” That’s the sound of a young bird calling to its mother for food. In the background are the competitive chirps of its siblings. In a family this big, you really have to chirp up to stand out.

There are many disadvantages to living in a large group—competition for mates, an increased risk of exposure to disease and infection, and, particularly if you’re a nestling, increased competition for food. But there are also many benefits to living in larger groups. Together, a group could collect more food, look out for and protect against predators, and share knowledge about danger, habitats to be avoided, and where to find different resources.

While the average fitness benefits of group living are well described, Dr. Kendra Sewall, an assistant professor of biology at Virginia Tech, is tracking down an unexpected benefit of group living—improved cognition. In the field of animal behavior, the term cognition refers to an animal’s ability to receive, process, and act upon information from the environment. The social environment is known to impact cognition and brain function in humans, but the effects of social experiences on cognitive development in animals is less studied. To tackle this, Sewall and colleagues Rindy Anderson, Susan Peters, and Steve Nowicki used zebra finches to investigate whether family size had an effect on an individual bird’s cognition.

To measure cognition, Sewall and her colleagues used a series of interactive puzzles and problem-solving tasks such as removing lids from grids, accessing food placed behind a barrier, or recalling the location of a food source.

Previous studies have found that young birds with more siblings face a competitive disadvantage and have impaired physiology and behavior in adulthood. However, Sewall and colleagues found that groups of birds raised in larger families perform better on some cognitive tasks than groups of birds from smaller families. One explanation for this observation credits the social experiences provided by groups—birds in larger families may “exercise” their cognition, have enriching social experiences, or benefit from more learning opportunities.

To determine the effects of clutch size on cognitive performance, Sewall and colleagues “cross-fostered” young finches in captivity, that is, they placed young finches from different clutches into one surrogate family. They used this design to control group size and access to nutrition. Sewall expected that young finches placed in larger broods would face more competition for the same amount of food than finches placed in smaller, less competitive broods.

The researchers hypothesized that sexually mature birds from smaller broods would perform better on cognitive tests than birds from larger broods, because the former were more adequately nourished by their foster parents, early in development.

The previous understanding was that birds benefited solely from the emergent properties of groups. However, Sewall and colleagues’ new results support the idea that there are also individual benefits to group living – increased intelligence. But this notion does not hold true for all types of intelligence.

Testing for inhibitory control in zebra finches: In this cognitive task, seeds are placed inside either an opaque or clear cylinder. Birds presented with opaque cylinders quickly deduce that food is only accessible through the sides. Birds presented with clear cylinders, through which the food is visible, will initially peck at the tube before deducing how to access the food. Courtesy of Kendra Sewall.

“There is a lot of work to be done,” Sewall explained. “We need to determine if these individual-level effects are restricted to a critical period early in development, or if it could also be seen later in an animal’s life.”

But for now, it appears that living in a big family may have its perks, after all.

Sewall presented the results of this research at the 2015 annual meeting of the Society for Integrative and Comparative Biology in West Palm Beach, Florida. 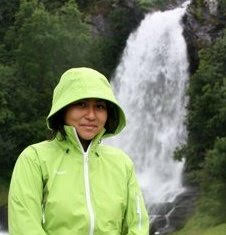 Alexis Lanza is a PhD student at the University of Florida. She is interested in embryological and larval development of marine invertebrates. Her research focuses on identifying the signaling pathways responsible for embryonic organizing activity in the annelid, Capitella teleta. Alexis is also interested in looking at how environmental cues can affect early development of marine invertebrates.