Home < Sponge ‘sneezes’ point to mechano-sensory system, minus the neurons

Sponges lack a nervous system, but somehow are still able to sense external stimuli and organize coherent behaviors. The largest group of sponges, demosponges, “sneeze” in response to mechanical stimuli. This response, much like our own sneezes, allows them to remove unwanted materials from their bodies. Ph.D. student Nathan Farrar, undergraduate Danielle Ludeman, and their advisor Sally Leys at the University of Alberta wondered how sponges sense their environment to produce this behavior, all without nerves.

Sponges feed by filtering food particles out of water. Water is brought inside the sponge by beating flagellae attached to specialized cells. The water travels through the sponge body, collecting into outflowing “excurrent” canals, which direct water into a large cavity called the osculum. From here water exits into the environment. The sponge “sneeze,” also known as

the inflation/contraction (I/C) response, begins when the excurrent canals inflate and fill with water. Next, the sponge contracts, and the waves of contraction force water and unwanted materials from the excurrent canals out through the osculum. The “sneeze” can be triggered in the lab by the application of inedible particles, which simulate the type of particles sponges might take in while filtering food out of the water, or the amino acid L-glutamate. In other animals, primary sensory neurons armed with cilia detect mechanical stimuli and relay information through the nervous system to coordinate a response. But while sponges possess some of the genes that code for proteins that make up the post-synaptic density of neurons, they do not possess a functioning set of specialized nerve cells.

Because sponges “sneeze” in response to an accumulation of particles in their osculum, Farrar and his colleagues first wondered how sponges might sense the change in flow rate caused by a blockage. The team identified small cilia associated with the epithelial cells of the osculum in five demosponge species. These cilia were distributed evenly across the inside surface of the osculum, and were all oriented in a similar direction, perpendicular to the water flow. Because of both their distribution and orientation, these cilia were perfect candidates for mechano-sensors, leading to the hypothesis that they might be involved in sensing flow rate. But it wasn’t immediately clear how Farrar’s team could test this hypothesis: they had only described these cilia morphologically, and if the cilia were indeed flow rate detectors, what was the molecular basis of signal transduction?

Working with Danielle Ludeman, Farrar tested the hypothesis that if the cilia contributed to the I/C response, then drugs that inhibit primary cilia function in other metazoans should also affect the sponge sneeze. When Farrar and Ludeman applied these compounds, they saw a marked reduction in the strength of contractions during the sponges’ sneeze response. This suggested that primary cilia may be important for mediating the sneeze response. Another effect of the drugs was cilia lengthening, a result consistent with the disruption of intraflagellar transport, seen in other Metazoans in response to these drugs.  Because this disruption is often linked with a decrease in intracellular calcium, Farrar and his colleagues wondered what role, if any, calcium played in the sponge I/C response.

To answer this question, Farrar’s team investigated calcium activity in the sponges during the sneeze using an in-vivo dye that fluoresces in the presence of calcium. At the start of the I/C response, there was a peak in intracellular calcium which appeared to travel like a wave across the sponge, followed by another, much sharper rise in calcium. Initially, Farrar thought that this second peak was indicative of cell toxicity. However, an experiment left running beyond the normal time lead to a serendipitous discovery: the second sharp peak was followed by several more large peaks. The series of calcium peaks appeared correlated with the contractions of the sponges. Based on these early findings, Farrar, Ludeman and Ley hypothesize that the intracellular calcium peaks may control the sponge sneeze, and that primary cilia control the production of the calcium waves.

Sponges, as sessile filter feeders that lack organ and nervous systems, often also lack the ability to captivate the interest of researchers and the public. However, this study highlights how exciting and important sponges can be to our understanding of sensory systems and evolution in general. Although we previously knew that sponges must have some sensory capabilities and can respond to external stimuli, we didn’t know much about the sensors that underlie these behaviors. We also had no mechanism for how sponges are able to coordinate their cells without nerves to produce a whole organism response. This study suggests that sponges use primary cilia in their osculum to sense water flow, and these cilia likely kick off a signal transduction cascade that produces a calcium signal, leading to the sponge sneeze.

Farrar’s research has broader implications beyond simply understanding the underlying mechanisms of the inflation/contraction response in sponges. He is generally interested in the evolution of nervous system development, and believes that studying sponges, as basal metazoans, is key to understanding how nervous systems may have emerged within Metazoa. According to Farrar, in the context of early animal evolution and phylogeny, one great challenge lies in interpretation.

“When you find evidence for a sensory system, a wide complement of neural molecules, and signaling pathways reminiscent of those seen metazoan nervous systems, the key question becomes, ‘What is the evolutionary significance of these findings?’

Armed with ever-increasing amounts of genomic and transcriptomic data, Farrar is currently investigating the molecular basis of this sponge sensory system, which should shed light on the connections between mechano-sensing in sponges and other metazoan sensory systems. 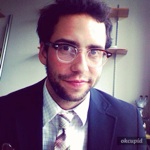 Desmond Ramirez is a Ph.D student at the University of California, Santa Barbara, studying molecules, behavior and evolution associated with photoreceptor cells dispersed in the skin of cephalopods. He’s more generally interested in evolution and the molecular and neural bases of behavior in invertebrates.