Fruit flies are savvier than you might expect—especially when it comes to the game of love. A virgin male has some idea how to play the game, but based on his experiences with a female, he’s quick to adapt if given another chance. He learns. He woos. He loves. Or at least he attempts a new and improved fruit fly version of love.

But are all experiences equally valuable for the fruit fly, when it comes to learning? Perhaps not. A recent study by Texas A&M University Ph.D. candidate Sehresh Saleem suggests that only positive sexual experience makes male fruit flies better at future reproductive attempts.

But before she could begin answering these questions, she first needed to test whether or not these flies were even able to learn to improve their performance—if experience made them better at courtship and perhaps even copulation.

Previous research on the effects of prior social experience on future sexual behavior has primarily focused on negative social interactions, such as courtship conditioning, where the male is rebuffed by the female before he gets a chance to mate (i.e., a ‘bad blind date’ scenario). Saleem and her PhD advisor Ginger Carney believe that this approach misses a critical aspect of the evolution of behavior.

“Copulation is important for these males to complete,” Saleem explains. “It results in a positive response in the males. It’s been shown that male fruit flies become less aggressive toward females after mating. It’s the act of mating that causes this change in behavior. Courtship alone doesn’t do it. So, there’s a key aspect of rewarded learning here that we’re not looking at.”

Fruit fly courtship consists of a sophisticated set of fixed behaviors that include the male following the female, tapping the female’s abdomen with his foreleg, unilateral wing extension and vibration (this vibration emits a sound called singing), and licking the female. The male will then attempt to mount the female for copulation by bending his abdomen towards her, and if she approves of his performance, copulation will commence.

To test the effect of sexual experience on a Drosophila melanogaster male’s ability to obtain future matings, Saleem and Carney divided males into two groups and gave them one of two levels of sexual experience: courtship of a receptive female but no copulation, or courtship with complete copulation. They placed these two types of males alone with a new female and recorded their courtship behavior. They then pitted the males of each type against each other in an arena to compete for the opportunity to copulate with a female and recorded the courtship behavior of each male and the experience level of the victor.

The researchers found that when males and females were placed alone together, experienced males (those that had already completed one copulation) spent less time courting new females than the naïve males did. These males also increased the frequency of abdominal bends towards the females. Essentially, they got right down to business.

A naïve and an experienced male (black marking on wing) court a female in order to obtain an opportunity to mate with her. The naive male begins courtship first (following, extending wing and singing). Once the female passes by the experienced male, he also starts courting her. Fever-pitched courtship continues throughout the video. Video courtesy of Sehresh Saleem.

Saleem and Carney found a similar trend when the males were competing against each other. Although the overall courtship duration was similar between male types in this context, the sexually experienced males extended their wings for longer durations and more frequently (during the singing phase), and also increased copulation attempts compared to the other males. This behavioral modification appeared to pay off. Experienced males obtained significantly more copulations than the naïve males.

“In general, the more naïve male is wasting his time doing other behaviors that are not fruitful, such as chasing the female. The experienced male knows what to do. He’s more efficient. There seems to be some degree of strategy,” Saleem explains.

To understand how females were choosing the more skilled courters, Saleem painted the eyes of some females and removed the tips of the antennae of others, rendering them either blind or without the ability to hear and smell, and then had the males compete for copulation opportunities again.

They found that vision did not play a role in female choice. When female sight was removed, the experienced males were still preferred over the naïve males. These results were not entirely surprising to Saleem: although males use vision to locate females at a distance, both sexes depend on their other specialized modalities when in close proximity.

However, when females were unable to hear the courtship song, Saleem says, “The experienced male lost his competitive advantage.” So it appears that when the experienced males are devoting more time to serenading the females, they really have learned what the ladies want.

Saleem and Carney found that males were able to learn from positive past mating experience, indicating a similar reward system as seen in mice and humans, likely involving dopamine circuits. But as for determining if particular males are better learners than others, that research is still in the works.

What is clear from this study is that copulation is so essential for the continuation of life in sexual species that the very act of it is rewarded by changes in the brain that cause learning—learning that specifically improves an individual’s skill for future mating attempts—even in the tiny, unassuming fruit fly. Not only is this an important discovery for neural and behavioral biologists in general, it may change the way scientists view learning in these hard-working, ardent flies.

Saleem presented the results of this research at the 2014 annual meeting of the Society for Integrative and Comparative Biology in Austin, Texas. The complete study has since been published in PLOS ONE and is available online. 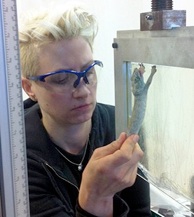 Casey Gilman is a doctoral candidate at the University of Massachusetts Amherst, studying lizard evolutionary ecology. She is particularly interested in the way animals interact with their environment and other animals, and how this drives the evolution of morphological, ecological, and behavioral traits. Her scientific background is in ecological physiology, but her current focus is on locomotor ecology and evolution, postcopulatory sexual selection, and communicating science to as wide an audience as humanly possible.