Trickery and misrepresentation are ubiquitous in animal social interactions, especially when stakes are highest. It follows, then, that many of the most dramatic cases are found when animals are in the business of procuring a mate. In this context some individuals – frequently male – may assume disguises, adopt unorthodox behavioral strategies, or attempt to misrepresent their quality as parents. These are all are seemingly reasonable (if underhanded) means of landing a female, yet what could possibly lead an amorous male to mimic the sounds of his species’ most lethal predator in his efforts to pair up?

While studying a group of little-known ‘Lebinthine’ field crickets found in the humid understories of Indo-Pacific jungles, Dartmouth College assistant professor Hannah ter Hofstede1 ended up unraveling just such a courtship system. On first inspection, ter Hoftede was puzzled by the behavior these crickets exhibited in the lab; not only did male Lebinthines sing completely off-key, but the females apparently lacked the usual (for crickets) reaction of walking towards the source of male calls. “That’s where I came across the first stumbling block,” recalls ter Hofstede, “the females would never approach male calls”. Stranger still, the male songs of these species – sung at more than twice the frequency of conventional cricket calls – were nearly the same pitch as those of bats, a major cricket predator.

Instead of shifting attention to a better-behaved group of crickets, ter Hofstede and her colleagues set up a series of experiments to take a more detailed look at the Lebinthines. The group focused on five field crickets species: three Lebinthines with high-frequency calls (e.g. Agnotecous obscuratus) and two closely related species with conventional low-frequency repertoires (e.g. Gryllus bimaculatus). Under deep red mood lighting (actually, crickets don’t see at this wavelength), ter Hofstede watched females from all five species as they responded to the pre-recorded mating calls of their respective males. In the two non-Lebinthine species, she found that females consistently approached male calls – no surprises there. As she had observed previously, however, Lebinthine females would never move towards the source of male calls. Instead, ter Hofstede realized on closer inspection that females were doing a “mini push-up” each time a male call was played. Females only performed this micro-workout upon hearing high-frequency calls, and never in response to the classic low frequency calls of other species.

Intrigued, ter Hofstede set out to determine the role of female push-ups in Lebinthine courtship. She observed that males added to arenas would initiate pursuit by first chirping their high-frequency songs, to which the females would respond with a push-up. The males would move a few centimeters towards vibrations generated by the female’s movement, stop, and then chirp again. This conversation played out until the pair had located one-another; effectively, the crickets were playing a risqué version of the game ‘Marco Polo’. 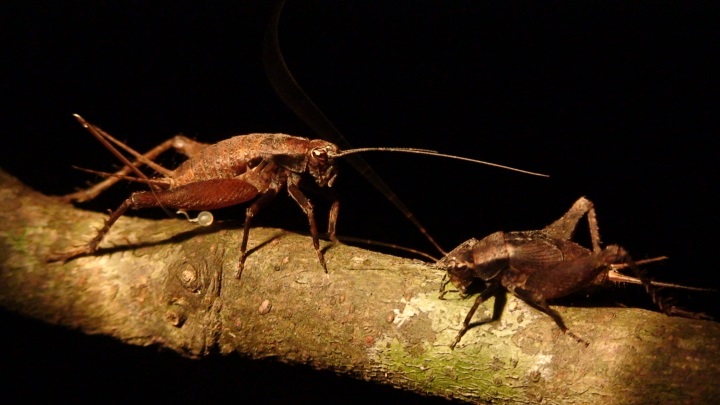 It appeared to ter Hofstede that male Lebinthines had worked out a cunning method of locating potential mates without the usual handicap of having to sit and wait for females to make the first move. This could have been a real boon to the mating success of whichever ancestral Lebinthine male first worked out this role-reversal, yet why did females respond in the first place? With this question in mind, ter Hofstede noted that the female ‘push-ups’ were reminiscent of an ‘Acoustic Startle Reflex’ (ASR) she had seen in other cricket species. In fact, the ASR is a ubiquitous feature of animal nervous systems; if you need a demonstration of what it looks like, clap your hands hard behind the back of an unsuspecting friend.

ter Hosftede reasoned that the ASR might have been the source of vibrations generated during the original ‘polo’ response in ancestral Lebinthine females. To test this, she examined ASR ‘startle’ responses to high and low frequency sounds in two Lebinthine species and four closely related field crickets. As anticipated, none responded to low-frequency sounds with an ASR. However, each of the four field cricket species twitched reflexively – generating clear substrate vibrations – in response to the high frequency sounds. Tellingly, the love songs of Lebinthine males were sufficiently high-pitched to induce ASRs in the non-Lebinthine species. This response makes sense, ter Hofstede explains, because high-frequency sounds generally tell crickets that nearby bats – which call at high frequencies to navigate and detect prey – might be about to make dinner out of them. When a cricket is close to being eaten, and ASR could give her a few milliseconds head start on an evasive maneuver landing it out of harm’s way. In the two Lebinthine species, however, ter Hofstede was unable to induce this startle response at any stimulus frequency tested. Instead, females only responded – with the ritual push-up – to the species-specific calls of related males.

The researchers wondered if startle responses induced by high-frequency male calls might have preceded the evolution of the contemporary Lebinthine mating ritual. If true, they proposed, this could be an example of ‘sensory exploitation’ – a still-murky process by which novel signals can arise by taking advantage of sensory capabilities and behavioral responses that evolved to serve unrelated purposes. In the case of the Lebinthines, it seemed that males had exploited the evolutionarily ancient ASR – a reflex that likely arose as a counter to predation – to pinpoint the locations of potential mates. Following this innovation by one or a few disingenuous males, ter Hofstede suggests, the resulting survival benefits to females (avoiding predator detection by no longer walking towards males, for one) would have favored those capable of tuning in to the particular calls made by their male counterparts. This was most likely achieved by adapting auditory pathways already sensitive to high-frequency bat calls.

This idea fit well with the phylogenetic and behavioral data, but would the wiring of the Lebinthine’s hearing system help corroborate the story? As ter Hofstede explains, crickets are ideal for addressing such a question because the neural basis of their hearing is well understood and relatively simple. The group looked at two auditory interneurons (ANs) with clearly defined roles in driving field cricket behavior. “One of these neurons – AN1 – tells the brain that this sound is a male of my species,” says ter Hofstede, “while the other – AN 2 – tells it that it’s hearing a bat, and it’s deadly!” Yet when they peered into the Lebinthine brain, the researchers found they were unable to locate the ANs that are so clearly defined in other cricket species. Using intra and extra-cellular recording methods, they discovered that all Lebinthine ANs were tuned only to the high frequency sounds that are picked up by the anti-predator AN2s of other species. In fact, Lebinthines may be completely deaf to the low frequency chirps of other field cricket species; ter Hofstede proposes that the low-frequency AN1 was either lost completely (with AN2 instead being co-opted for mate identification) or that AN1’s tuning was shifted towards that of AN2. Though either explanation could fit with the proposed scenario of evolution by sensory exploitation, ter Hofstede hopes that future study of the Lebinthine auditory system will bring to light more detailed insights about how this process occurs at the neural level. Likewise, it remains unclear what additional predation risks – if any – the Lebinthines might face by having lost the otherwise-ubiquitous ASR response.

The Lebinthine story offers a unique window into how the exploitation of sensory channels can direct the evolution of novel signals. As ter Hofstede points out, it’s clear that the term ‘sensory exploitation’ traditionally used to describe this process is something of a misnomer. “Although the sensory system of the receiver is being exploited by the novel signal,” she explains, “it’s not necessarily true that this is to the detriment of the individual being exploited. If there were a significant cost, you wouldn’t expect the evolution of this very specific communication channel to occur.” This is counterintuitive perhaps, yet arguably no more so than the independent invention of ‘Marco Polo’ by a group of cryptic tropical insects.

Dartmouth College assistant professor Hannah ter Hofstede presented the results of this study research at the 2016 annual meeting of the Society for Integrative and Comparative Biology in Portland, Oregon. The results were also recently presented in a report published in Current Biology.