From invisible ink to enigmatic ciphers, there are plenty of ways to send secret messages. But what if you had to send covert signals to an organism from a different species without getting caught? How do you hide information from one party, and be easily understood by another?

That is precisely the challenge faced by black widow spiders. During an early morning talk at the Society for Integrative and Comparative Biology’s 2012 conference, Nick Brandley captivated his formerly sleepy audience with a story of spiders’ covert communication; one of colors instead of words. The notorious red hourglass marking of the black widow serves as a warning to predators, and yet, it does not appear to frighten off prey. The secret to the undercover warning is in the eye of the beholder: the predators and prey literally see things differently.

The black widow spider is often painted as a vicious hunter, armed with venom that can kill a person, but this overly fearsome depiction may be the stuff of B-series horror movies. “Black widows get a bad reputation,” Brandley says. “Yes, their bite can kill a human, but it’s very rare that that happens. And they’re very gentle creatures most of the time…They’re not as big of a problem as people like to make them out to be.”

While most humans generally stay away from black widows, some birds routinely eat spiders. These birds might make the mistake of trying to make the toxic black widow their dinner—if it weren’t for the bright hourglass marking. Even though only female widows are just black and red, their hourglass has been suspected to be a form of aposematic coloration: bright warning colors advertising an animal’s unpalatability to potential predators. At first glance, one might think that is ridiculous for black widows. After all, the hourglass is on the spider’s underside; how could a bird even see it? The answer to that question, as Brandley explained, is deceptively simple. Black widows build horizontal webs, and rest upside-down, belly facing the sky, in plain sight of any curious bird.

The problem with any bright coloration, though, is that black widows are sit-and-wait predators. A spider will hide in a dark corner of her web, motionless, waiting for an unsuspecting insect to wander by.  If that insect were to see the spider, odds are that it would have a better chance of escape. A visually obvious black widow could ultimately be a very hungry black widow.

Brandley, a third-year PhD student at Duke University, and his advisor Dr. Sönke Johnsen, thought that perhaps color vision could be the key to the spider’s covert communication system. If the hourglass warning were obvious to a bird, but invisible to insects, then the widows could have the benefits of warning coloration without alerting their prey.

Before going any further, Brandley needed to determine whether or not the hourglass actually functioned as a warning signal. If predators did not avoid spiders with hourglasses, he would have to rethink why the widows have hourglasses at all.

To test the effect of an hourglass on a predator’s behavior, Brandley created models of widows with and without the red markings. These were no ordinary models. To get precisely the correct shape, Brandley used a 3D rendering of a black widow that was originally created for video game developers. “Lots of people like having spiders in their video games, because they’re creepy,” Brandley says.

More importantly, because he wanted to match the signal’s color, Brandley needed to determine the exact wavelengths reflected by the widow’s body and the small hourglass. Using a device called a spectrometer, he quantified the black widows reflectance, a physical measure of the spiders’ coloration. According to Brandley, this seemingly simple process was one of the most difficult parts of his entire experiment. “The hourglass is such a small area that it’s about at the threshold of what the spectrometer can measure…I had to rig a weird set-up to get the spider in.” Then he had to find paints that exactly matched the widow’s color. Thankfully, he says that wasn’t nearly as difficult. “I think I had to try two different red paints, and the second red paint worked…It was just pure luck, I guess.”

After setting up specialized bird feeders in his friends’ backyards, Brandley measured how often birds would either attack, approach, or avoid his black widow models. Sure enough, birds were much more likely to avoid spiders with red hourglasses, and attack spiders without them.  “You saw birds see this red spider and jump back, startled,” he said.  Although Brandley is still collecting data, he tentatively suggests that birds were more than three times as likely to peck an all-black spider as one with an hourglass.

Since the warning signal seemed to work, Brandley investigated how the hourglass might be concealed from the widows’ prey. He knew that birds and insects have differences in their ability to perceive color, and hypothesized that those differences might be the key to the widows’ covert visual signal. Most birds have some long-wavelength photoreceptors that give them the ability to see colors like green and red. Insects, however, often lack long-wavelength photoreception.  As a result, insects generally cannot see red well. By combining models of insect and bird photoreception with his measures of black widow coloration, Brandley estimated that the black widow’s hourglass would appear about 60% dimmer to an insect than to a bird. The difference may not seem like much, but it means that insects have a hard time seeing a black widow’s hourglass.

This makes the female black widow’s hourglass a great example of covert communication. Intended recipients of the message, such as birds that eat spiders, can see the hourglass very well, and appear to heed its warning of toxicity. The widow’s prey is simply left in the dark. 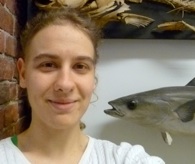 Kara Feilich is a graduate student in the Lauder Lab at Harvard University, studying the evolutionary biomechanics of fishes.  Previously she studied biomechanics and ecophysiology at Wellesley College, working with any organism the faculty would let her—including sanguivorous leeches. When she isn’t running experiments or writing about them, she enjoys wandering through zoological collections.